{Fireside Fridays} The Wand in the Word

Howdy, folks. I apologize for missing last week’s Fireside Fridays—last week was one of the most stressful yet, and it’s been a stressful year. However, much of the stress-inducing events are behind me, and summer beckons. I’m really excited for this post, because I hope it’ll encourage you guys like the book did for me. 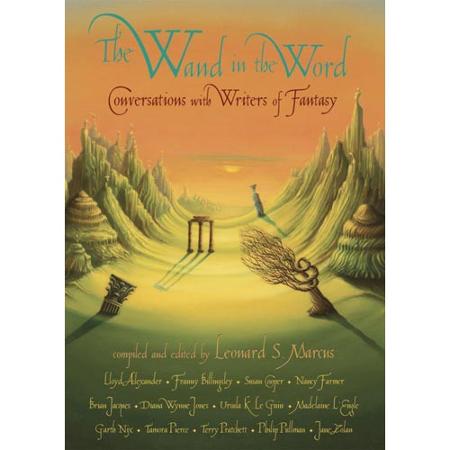 So, the book: The Wand in the Word: Conversations with Writers of Fantasy, compiled and edited by Leonard  S. Marcus. First off, isn’t the title fabulous? I love the alliteration and picture it paints. It’s the perfect phrase for fantasy authors. And second, the book itself. The subtitle says it all—Marcus interviewed thirteen well-known fantasy writers and wrote down their words here, along with (one of my favorite aspects of this book) images of their rough drafts. Here’s the list of authors featured—I think you guys will recognize many: Lloyd Alexander, Franny Billengsley, Susan Cooper, Nancy Farmer, Brian Jacques, Diana Wynne Jones, Ursula K. Le Guin, Madleine L’Engle, Garth Nixx, Tamora Pierce, Terry Pratchett, Philip Pullman, and Jane Yolen.

The purpose of this post is twofold (we really need to use that word more often): First, I want to convince you guys to pick up the book, and second, I want to share some of wonderful insights and—yay!—quotes I gleaned from it. Ready?

The first thing that grabbed me about The Wand in the Word was the interview questions. Honestly, I don’t often enjoy reading interviews because they can feel choppy, the questions seem repetitive or pointless, and I don’t end up learning as much as I wanted to. Anyone with me on that? But Marcus asked a splendid set of questions that explored numerous areas of these author’s lives: their growing-up years, if they liked school, when they knew they wanted to be a writer, their favorite part about writing, funny quirks, etc. Some questions he asked every single author (like most of the ones above) and some he tailored to the individual person, which I appreciated. I enjoyed seeing how their youth impacted the rest of their lives and their writing, and I loved their reasons for why they write fantasy. Best of all, he asked each what advice they’d give to young writers.

Another thing that struck me as I read was the diversity of these people’s lives and opinions. First off, their voices were different. It’s delightful how they’ve each got a different style of writing and talking about their lives. I love it. But there were even deeper differences. Some of them loved school, some failed it. Some were deeply impacted by World War II, some were born after it. Some were your stereotypical shy, reculsive bookworms and others were wild extroverts. Some had supportive parents, some had divorced ones. Some write everything by hand, some only type. Some revise insanely, some labor over their first drafts so there’s little to change. I enjoyed seeing how diverse and varied people—and specifically writers—are. It’s a wonderful thing.

One last bonus of the book: It has lists of all the books each author has written after their interview, so now I have several new series to look into.

Okay, now for the quotes. I’ll pick my favorite from each author interviewed.

Hope is an essential thread in the fabric of all fantasies, an Ariadne’s thread to guide us out of the labyrinth. … Human beings have always needed hope, and surely now more than ever.

Hope and fantasies. An interesting connection, and one that, the more I think about it, I really love and agree with.

[F]antasy allows you to step outside our world and look at it with a little bit of perspective. It can take something in our world, for instance, “identity,” which has only an abstract reality, and it can make it palpable.

She expressed exactly one of my favorite things about fantasy, how it makes truths, morals, abstract ideas physical things, flesh-and-blood. It helps me understand those concepts and our world, as she said, so much better.

To those up until the age of about fifteen, I say, Read, read, read. Write if you feel like it. But reading—getting the words and the rhythms inside you—is the most important thing, because you’ll never have so much time again.

Wow. I’d never thought of it quite like that before. I knew, of course, that writers must read. But I hadn’t thought that when you’re younger you should read more than write. And of course, even those of us older than fifteen should still read to get, as she put so beautifully, “the words and the rhythms inside” us.

The world is composed of great sorrow and great joy. It has a grandeur beyond anything I can describe, but this I can say: to know what you are and where you belong is the true meaning of Magic.

This is apparently a quote from a character in one of her books, but I love it. There is Magic right here, in this world.

I love it that as a writer you work with the poetry and music of words. Words are as wild as rocky peaks. They’re smooth as a millpond and as sunny as a day in a meadow. Words are beautiful things. Every word matters.

Leave it to Brian Jacques to say it so perfectly.

One more quote from him on the importance of living and experiencing real life and people for a writer:

When you go to sea, or you’re a cop, or a long-distance truck driver, or you deliver milk—all of which I did at one time or another—you see people with all their frailties and their strengths. You make friends and meet people you’d never think would be in them jobs. You talk to people and see life through their eyes as well as your own. All things you couldn’t get from books.

As Henry David Thoreau said, “How vain it is to sit down to write when you have not stood up to live.”

He would walk up and down—this rolling, little pear shape—tolling out in his great deep voice. You just hung on his words.

I think that Tolkien made quite a cynical effort to get rid of us so he could go home and finish writing Lord of the Rings. … He spoke in a mutter. His mind was on finishing Lord of the Rings, and he was really musing to himself about the nature of narrative. But I found this so fascinating that I came back week after week, as did one other person. … And because we were stuck there, Tolkien couldn’t go away and write Lord of the Rings!

So, yeah: Diana Wynne Jones heard both Lewis (top quote) and Tolkien lecture. Not much else to say except that I’ve turned completely green. (And don’t you love her description of Lewis?)

[My parents] were very much work oriented, but not particularly achievement oriented. That takes the curse off the work. “Success” is not the point. I think my father felt that to be able to do work you want to do was one of the greatest privileges and rewards life can offer.

How freeing it could be to write—or do anything—without worrying about success. And it’s true: We get to write. How blessed are we.

I love to swim. Swimming has a definite rhythm, and writing should have it, too. If you are using the rhythm in one aspect of your life, it makes it easier to feel it in other aspects of your life. If I hadn’t swum, I probably wouldn’t have written some of the things I’ve written.

Isn’t that interesting? And it doesn’t have to be swimming necessarily—it’s like what Brian Jacques said, about having to live life to write. Pursuing other beneficial activities helps our writing.

But also write what you love, not what you think is hot this year or has a better chance of selling. Write the stories and books that you want to read. If you want to write fantasy, then read history and nonfiction and other genres of fiction, not only fantasy, or you’ll just be a copyist of the greats who have gone before. Read the great novels of the last two hundred years. If they’ve stuck around this long, there’s always a reason.

Wonderful advice. I’d add, read the great novels of the past thousand, thousand plus years. The classics, as far back as they go. It all makes you and your writing richer, better.

The hardest and most important thing to learn is to listen to your gut. That’s really hard because your gut is really quiet and a lot of other things are really loud. But the thing that makes you want to write knows a lot more about what it’s doing than you do, and you have to find some way to trust that thing, even when you’re telling yourself, “I stink!”

For me, that thing is God, and she’s so right that we have to listen to that thing, to Him, when we wonder why we’re doing this anyway and think we don’t amount to anything.

This is … the magic place. The world. Here. And you don’t realize it until you look.

I also found this remark by him interesting:

[I love being] my own boss—and having the sense of slight amazement that people are paying me a lot of money to do what I really, really want to do. I feel blessed—which is a very embarrassing position for an atheist to be in!

… the sound of Milton’s poetry when heard read aloud, and then tasted afterwards in your own mouth, was enormously powerful. From that experience, I learned that things can affect us before we understand them, and at a deeper level than we can actually reach with our understand. I also learned that you respond physically to poetry. Your hair stands on end. Your skin bristles. Your heart goes faster. … [I tell students,] “If you don’t understand a poem, so what? Just listen to it. Just taste it. Just say it. Just let it do its work without interfering with it. Sound first—then meaning.”

This is so, so true. I think you can tell something is brilliant, powerful, deep even without fully understanding it. You can even begin to grasp its true meaning without consciously deciphering it. And the taste of poetry—yes.

I don’t think I have ever written a novel that ended the way I thought it would end. Someone once called this way of writing “flying into the mist.” I love that. As you’re going along, it’s wonderful to be surprised. That’s as true for the writer as it is for the reader.

Many other authors said the same, how characters and plot lines surprised. I too love that. I think it’s part of what Tamora Pierce said when she talked about listening to your gut: Let your story go where it will. Trust it, in a way. You’re the author, of course, but sometimes you have to listen to the story and let it take an unexpected turn.

Well, good readers, it’s your turn. Which quote was your favorite? Did you learn anything new or get inspired? Have you heard of or read anything by these authors?

From the Good Old Days